What’s The Point? (Of Discipline) 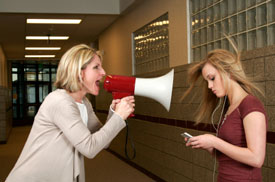 What’s The Point? (Of Discipline)

Joan just wanted to relax. She picked up her favorite book and got into bed. She had just told her 12 year old daughter Brittany to clean her room. Five minutes later her daughter starts a huge drama scene. Brittany started slamming doors and went into Joan’s room and started screaming,

“You hate me. You want to ruin my life. You are so mean”.

Joan tried to calm her down but Brittany cranked up the drama. She took Joan’s antique vase and threw it at her mirror, which shattered both the vase and the mirror. This level of drama went on for hours.

Joan, pushed to the edge, lost it. She screamed louder than Brittany and literally dragged her kicking and screaming into her room. (We’ve all been there.)

The next week Joan came in to my office. I asked her what was Brittany’s consequence and she just stared at me.

After some silence she told me that she forgot to give Brittany a consequence.

Here’s the deal. Yelling at your daughter feels like a consequence but it isn’t. In fact, Joan admitted that later that weekend she agreed to let Brittany have a friend over to spend the night and they went shopping the next day.

What did Brittany learn from all of this?

She learned that if she has a big enough fit, she doesn’t have to clean her room, she can have a friend spend the night, and go shopping.

In other words Joan ended up rewarding Brittany for her bad behavior.

Years ago, when I was a rookie therapist, I saw a young frustrated mother who had four small children. I was horrified at how she disciplined her kids. She would go into a rage and was out of control when she spanked her kids. Child Protective Services had been called in and she was required to go to therapy.

During one of our sessions I told her that she should not spank her kids when she was angry. (Now I thought this was common sense, again I was a rookie.) I will never forget her reply.

She said, “Then what’s the point?” (Wow, she was serious.) But actually this is a great question.

What’s the point of discipline?

These mindsets disempower both you and your daughter.

When your daughter makes a mistake, instead of asking, “How could she do this to me?” ask yourself, “What does my daughter need?” Though it looks different, your daughter needs you just as much as when she was a toddler.

It gets confusing because she looks like an adult. But despite her great cognitive ability and developed body, she is very much a work in progress with her undeveloped prefrontal cortex, concrete thinking and unstable hormones. YES, your daughter needs your guidance, love, and protection, especially when you consider the dangerous combo of a developed body with the faulty brakes of the undeveloped prefrontal cortex.

Your daughter’s mistake or negative behavior tells you what she needs.

When your daughter makes a mistake, ask yourself this question.

Does my daughter need–

The point of your “discipline” is to empower her with the life skills needed to live a successful life.

Here’s another way to say it.

You are giving your daughter the missing puzzle pieces for her to have healthy relationships and live her destiny.

If this feels overwhelming, don’t worry I can help. I decided that I am going to offer my Power Your Parenting Program this summer starting June 10th. Interested– let me know and I’ll send you info.

Sign up below to receive my weekly ezine Power Your Parenting and the first chapter from my forthcoming book, Dial Down the Drama.

Do you wonder if your teen has ADHD? (Link in bio

I see this so much in young women. * The senior i

I have come along way from the very very imperfect